House has the votes to impeach Trump for inciting Capitol riots

Speaker Nancy Pelosi is on the cusp of majority support in the House to impeach President Donald Trump, part of a two-front effort to punish and remove him for inciting the deadly insurrection at the U.S. Capitol last week.

Key members of the House Judiciary Committee introduced a single article of impeachment Monday that has already gathered at least 218 cosponsors, according to a congressional aide involved in the process, meeting the majority needed in the House. Pelosi signaled Sunday night that the House would vote on that article if Trump refuses to resign and Vice President Mike Pence won’t initiate other procedures to remove him.

“Because the timeframe is so short and the need is so immediate and an emergency, we will also proceed on a parallel path in terms of impeachment,” Majority Leader Steny Hoyer (D-Md.) told reporters Monday. “Whether impeachment can pass the United States Senate is not the issue.”

“There may well be a vote on impeachment on Wednesday,” he said.

At a brief House session on Monday morning, the House formally accepted the resignation of Sergeant-at-Arms Paul Irving, who was partly responsible for security arrangements on Jan. 6. And moments later, Rep. Alex Mooney (R-W.Va.) blocked unanimous consideration of a resolution from Rep. Jamie Raskin (D-Md.) that would have urged Pence to invoke the 25th Amendment process to remove Trump from power. The House intends to vote on the resolution Tuesday.

Although some Democrats have voiced worry that impeaching Trump with just days left in his term could hamstring President-elect Joe Biden’s early weeks in office, momentum has only grown as new and disturbing footage of the violence wrought by the rioters has emerged. That footage included the beating of a Capitol Police officer, yanked out of the building by a crowd of Trump supporters. The officer in the video has not been identified, but it surfaced after the news that at least one officer, Brain Sicknick, died of injuries sustained during the onslaught.

Every new indication that the rioters included a more sophisticated contingent of insurrectionists has inflamed the House anew, even as Republicans have continued to express wariness, if not outright opposition, to impeachment. 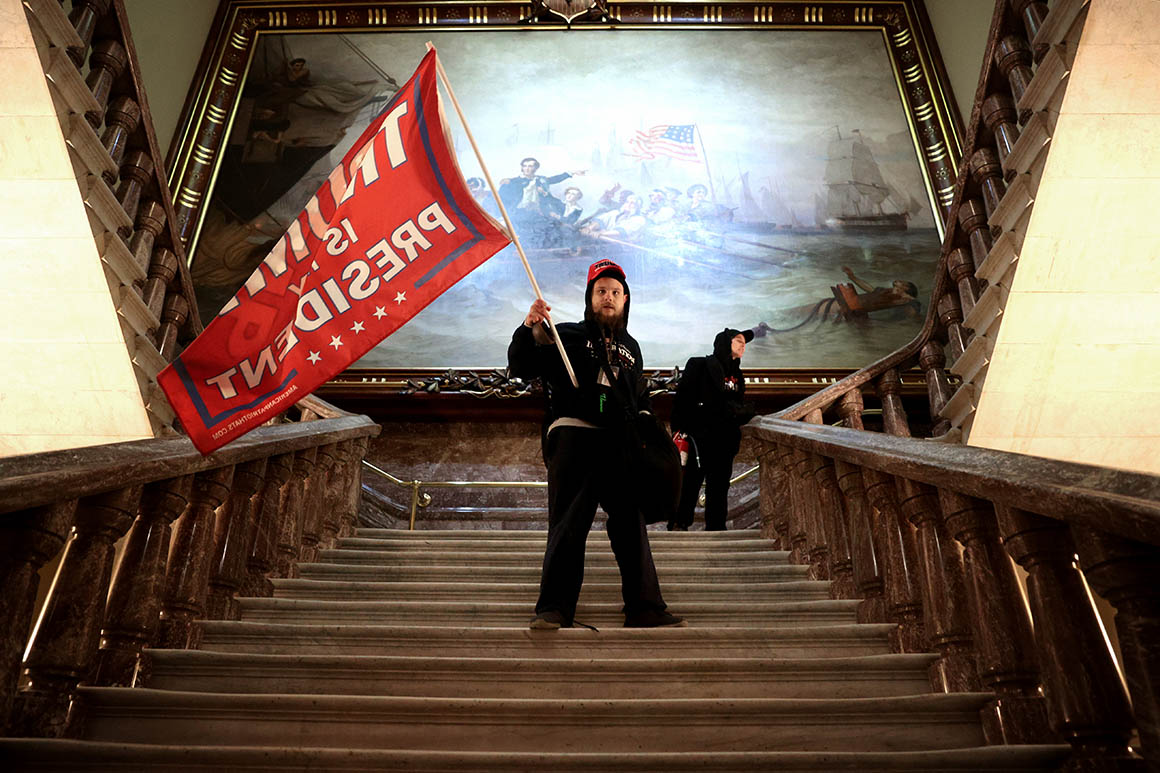 “We need to take very seriously what happened … Hours and days matter,” Rep. Chrissy Houlahan (D-Pa.) said in an interview. “I wish we could just hold our breath” for 10 days. “But I don’t think we should or can afford to. I think we’ve seen that our nation and our homeland is in danger.”

“I’ve heard a lot of people say, Is it the right thing politically to impeach this president? … Will it harm the Democratic Party?” Rep. Dan Kildee (D-Mich) said in a press conference Monday. “In terms of whether it could harm the Democratic party, I could not care less.”

Though some Democrats have also floated the notion of impeaching Trump but delaying transmitting the article to the Senate — a move that would forestall a Senate trial until after Biden’s early term plans and nominees are in place — a top Pelosi ally, Rep. Adam Schiff (D-Calif.), indicated Monday he favors an immediate trial.

“If we impeach him this week … it should immediately be transmitted to the Senate and we should try the case as soon as possible,” Schiff said on “CBS This Morning.” “Mitch McConnell has demonstrated when it comes to jamming Supreme Court justices through the Congress, he can move with great alacrity when he wants to.”

The House is also confronting burning questions about how the security measures in place to protect lawmakers on Jan. 6, when violence was widely expected and foreshadowed by pro-Trump groups, collapsed so quickly. Democrats are probing decisions by Capitol Police leadership and have openly worried that the insurrectionists had some kind of inside help to navigate the complex.

Democrats are also increasingly perplexed that federal authorities haven’t held a single public briefing to explain what went wrong or provide details of their efforts to hold the Capitol rioters to account. There’s been a steady stream of arrests and public efforts by the FBI to locate some of the perpetrators, but no public comments from senior leaders, despite the assault on the seat of government.

“It has been five days since the most significant attack on a branch of the United States government since British forces set fire to the U.S. Capitol in 1814,” they wrote, “and yet the American public has not heard from federal law enforcement authorities regarding an official account of the events of that day or the steps being taken to prevent further acts of domestic terrorism in the coming weeks.”

Another thorny question House leaders are confronting: Debate within their ranks about whether to punish Republican colleagues who echoed Trump’s calls to march on the Capitol last week and used similar language to amplify false claims about the integrity of the 2020 election. Some progressive lawmakers have sought to punish Republicans under a 14th Amendment clause that forbids the seating of lawmaker who “shall have engaged in insurrection or rebellion against the same, or given aid or comfort to the enemies thereof.”

Democrats’ effort to pressure Trump to resign or force him from office come just nine days left in his term. But Pelosi has argued that Trump is “unhinged” and a threat to America who warrants immediate removal. Some of her allies say acting to remove Trump could box in his worst impulses ahead of his departure and is simply the right thing to do, given his monthslong campaign to undermine the legitimacy of the 2020 election, which led to the violent riots.

“In protecting our Constitution and our Democracy, we will act with urgency, because this President represents an imminent threat to both,” Pelosi said in the letter to Democrats on Sunday night laying out next steps.

On Monday afternoon, the House will attempt to pass a measure on Monday imploring Pence to invoke the 25th Amendment, through which he and the Cabinet declare Trump “incapable of executing the duties of his office, after which the Vice President would immediately exercise powers as acting president.” If Republicans object, as is virtually certain, Democrats will pass the bill via a roll call vote on Tuesday.

The 25th Amendment’s removal process, however, would be unlikely to deter Trump. It includes a mechanism for the president to contest his removal, which triggers a weekslong process that would extend past the expiration of Trump’s term.

Rep. David Cicilline (D-R.I.), who introduced the impeachment measure, indicated that no Republicans are among the original cosponsors of the measure but he’s hopeful some ultimately vote for it when it comes up.

It’s also not clear when the Senate will take up the House’s measure. The Senate isn’t scheduled to return until Jan. 19, but will hold pro forma sessions on Tuesday and Friday. In theory, a senator could try to pass the House resolution by unanimous consent, but as of now it appears unlikely that it would pass.

A small number of Democrats have opted not to co-sign the bill, but privately say they will vote to support the resolution on the floor, the source added.

The impeachment effort in the House is likely to be bipartisan, with Democrats expecting at least one GOP lawmaker — outspoken Trump critic Rep. Adam Kinzinger of Illinois — to sign on. A handful of other House Republicans are seriously weighing it, according to several sources, though those lawmakers are waiting to see how Democrats proceed, and some are concerned about dividing the country even further.

Among the GOP members whom Democrats are keeping an eye on are Reps. John Katko of New York, Brian Fitzpatrick of Pennsylvania, Fred Upton of Michigan, Liz Cheney of Wyoming and Jaime Herrera Beutler of Washington.

Across the Capitol, at least two Republicans — Sens. Pat Toomey of Pennsylvania and Lisa Murkowski of Alaska — have called on Trump to resign. On Saturday, Toomey told Fox News, “I do think the president committed impeachable offenses,” but told CNN the next day that he does not believe there is enough time to impeach.

Sen. Ben Sasse (R-Neb.) has also said he would consider articles of impeachment.