Fire near Capitol sets off scramble amid heightened inauguration security

Authorities scrambled on Monday morning to respond to a fire in the general area of the U.S. Capitol ahead of President-elect Joe Biden’s inauguration later this week.

The fire was located under a highway nearby that could be viewed from the Capitol, including in striking images of smoke pluming with the Capitol in the frame.

A National Guard source familiar with the situation said that a propane tank exploded at a homeless camp nearby. Several other propane tanks have been spotted lying around and are being investigated.

The event upended a rehearsal for Biden’s inauguration, a walk-through that had already been postponed because of security concerns. Military and civil law enforcement have been on guard against any warning signs ahead of the transfer of power after the violence earlier this month.

Officials have been especially worried about the possibility of an “insider threat” on Biden or other people on Inauguration Day, and have placed enhanced scrutiny on the approximately 25,000 National Guard members who have been authorized to help secure the city. 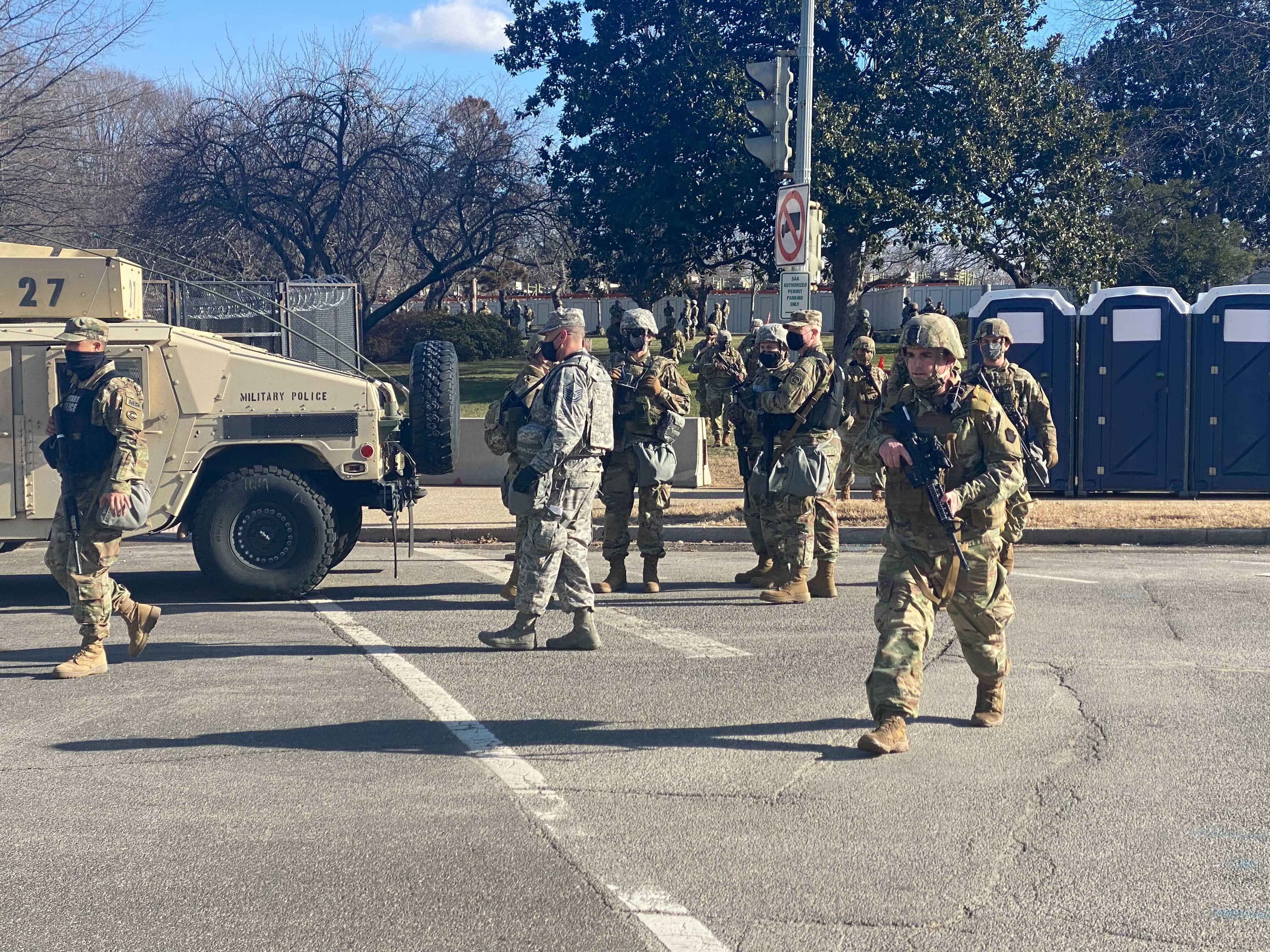 “We can either do it or be second-guessed after the fact for not doing it,” William Walker, the commanding general of the D.C. National Guard, told Fox News on Monday. “So in an abundance of caution, we … want to make sure that we have the right people in the security bubble. We have the time and the ability to do it.”

Earlier in the day on ABC’s “Good Morning America,” Walker said that these steps had been taken in advance of previous inaugurations and similarly high-profile events.

“They’re screened, and repeatedly screened, until they are actually put on the street,” he said.

The fire on Monday was located less than a mile from the Capitol, though it was not in direct proximity. Nevertheless, law enforcement has been aggressive in establishing a perimeter around the Capitol in the wake of the deadly riots earlier this month, including checkpoints many blocks away from the arterial roads leading to the complex.

First responders quickly mobilized to the site of the reported fire, and the aggressive reaction demonstrates the level of concern that officials have displayed in anticipation of Inauguration Day. Local first responders reported putting out the fire.

“Update outside fire 100 block of H St SE. Fire involved a homeless tent beneath freeway,“ the District of Columbia Fire and Emergency Medical Services Department wrote on Twitter. “Occupant indicated she was using propane, which may explain report of explosion.“

The department reported that one person was sent to the hospital with non-life-threatening injuries as a result of the blaze.

Elsewhere, law enforcement mobilized to secure state capitol buildings over the weekend, though the expected protests largely failed to materialize.

But in the nation’s capital, officials quickly moved to clamp down on traffic around the complex, with the U.S. Capitol Police preventing movement in and out of buildings in the area and discouraging people from nearby windows and doors.

That included an announcement over the loudspeaker near the rehearsal space stating what ended up being the lockdown of the entire perimeter around the Capitol complex.

Near the exit, word traveled by word of mouth and radio to security that a lockdown was going into effect. Officers had no idea why, but were eventually told to “put on your helmets” as a “precaution.”

A short time later, the lockdown was lifted, according to the National Guard source, and an all-clear was issued by the U.S. Capitol Police.

Eugene Daniels contributed to this report.

CORRECTION: An earlier version of this report gave an incorrect location for the fire, which occurred in Washington, D.C.