The Senate is constitutionally permitted to try Donald Trump on the House’s charge that he incited the Jan. 6 insurrection, senators voted Tuesday, sidelining the former president’s primary defense in the impeachment case against him.

But 44 Republicans backed the president’s claim, a reminder that the House faces a steep uphill climb if it hopes to convict Trump on the incitement charge, a verdict that would require 67 votes of support in an evenly divided Senate.

Still, the vote permits the impeachment trial to move ahead Wednesday, when the House will present its opening arguments in its effort to win Trump’s conviction. And the six Republicans who voted with Democrats was a gain of one — Sen. Bill Cassidy (R-La.) joined them — from a similar test vote orchestrated by Sen. Rand Paul earlier in the month. With the vote, the senators supported their own ability to try a former president, a case that has won support from legal scholars of all ideologies but that Trump’s team said was unconstitutional.

The senators voted after a day of arguments, beginning with the House Democrats opening their case Tuesday to convict Trump of inciting an insurrection with a montage of harrowing scenes of violence wrought by the former president’s supporters during the Jan. 6 insurrection at the Capitol.

Though the footage has been well-worn since that day, the House’s prosecutors spliced together the most violent and chaotic images, intertwining them with Trump’s own remarks encouraging supporters to march on the Capitol. The shocking footage — which included the shooting death of rioter Ashli Babbitt and the assault of numerous police officers — forced senators to relive the moments when many of them fled the violence, fearing for their own safety.

The footage seesawed between the quiet congressional proceedings that began earlier on Jan. 6, when the chambers met to certify President Joe Biden’s Electoral College victory, and the encroaching mob. It showed them breaching the Capitol and eventually chasing Vice President Mike Pence and terrified lawmakers out of the House and Senate. In between these scenes, the managers featured Trump’s own comments to the crowd and his tweets apparently excusing their conduct. 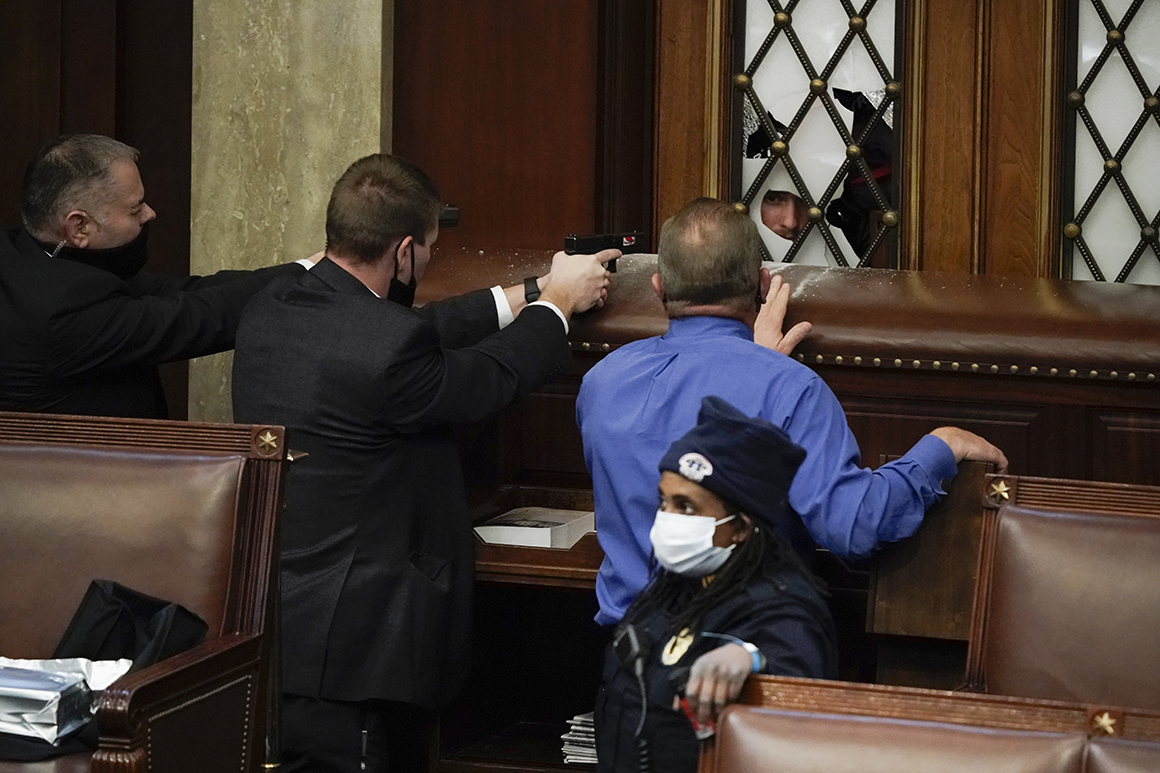 The House’s presentation of the footage is the opening salvo in the Democrats’ argument that Trump is attempting to “shift blame onto his supporters” for igniting the Jan. 6 insurrection at the Capitol and is relying on disputed legal theories to avoid accountability for his months-long attempt to subvert the 2020 election results.

Senators were gripped by the footage showing violent rioters seemingly taking cues from Trump’s rhetoric and storming into the Capitol. Sen. Cory Booker (D-N.J.) put his hands over his eyes when footage played of a shooting outside the main House door. Several senators rubbed their eyes and shook their heads during a video showing a D.C. police officer being crushed between a set of doors. And Sen. Joe Manchin (D-W.Va.) shook his head when Trump told the rioters, “we love you.”

In a nod to the opening day of Trump’s second impeachment trial, the Democratic impeachment managers maintained that the Senate has full constitutional authority to put a former president on trial, as senators prepare to vote on whether the trial can proceed. His attempt to claim otherwise is a farce, they said.

“Because President Trump’s guilt is obvious, he seeks to evade responsibility for inciting the January 6 insurrection by arguing that the Senate lacks jurisdiction to convict officials after they leave office,” the House managers wrote in a 33-page rebuttal to Trump’s pre-trial brief.

Tuesday’s filing came in response to an argument put forth by Trump’s defense team that, among other defenses, pinned the blame on the rioters themselves, rather than on the then-president’s rhetoric. They accused House Democrats of perpetrating “political theater” and said Trump’s First Amendment right to free speech was being inappropriately scrutinized.

Rep. Jamie Raskin (D-Md.), the lead House impeachment manager, said Trump’s attorneys were aiming to “stop the Senate from hearing the facts,” by arguing that the trial itself is unconstitutional. He said Trump wants to make the Senate “powerless” against a president who commits impeachable offenses during his final days in office.

Democrats said the suggestion that a former president can’t be tried by the Senate defies logic — a claim they note is backed up by constitutional scholars of all ideologies.

“It would literally mean that a president could betray their country, leave office and avoid impeachment and disqualification entirely,” said Rep. Joe Neguse (D-Colo.), an impeachment manager.

The impeachment managers spent their opening arguments attempting to remind senators of their own personal experiences during the Jan. 6 insurrection — recounting the terror they and their loved ones endured while taking cover, of the uncertainty about whether they would make it out alive once the Capitol was breached.

“They could have killed all of us,” added Rep. David Cicilline (D-R.I.), another impeachment manager. 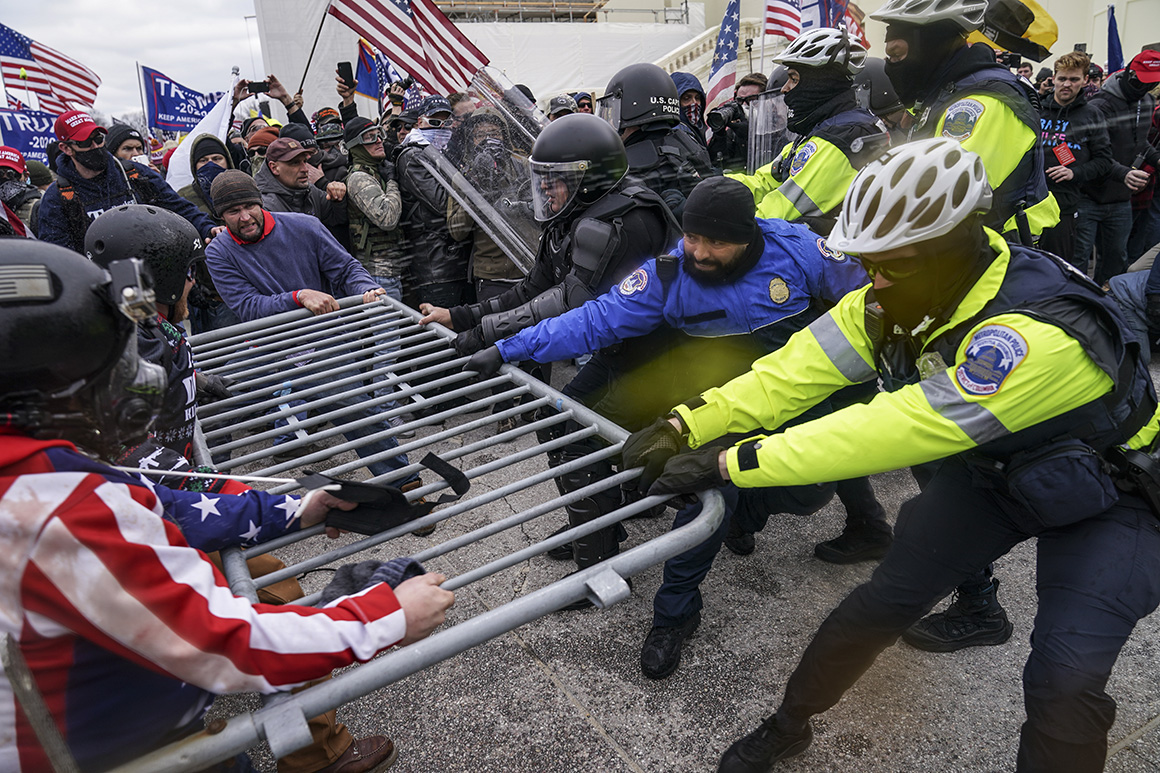 Raskin recounted to the Senate his own terror that day, a day after he buried his 25-year-old son Tommy, when his daughter and son-in-law hid from rioters in a Capitol office, sending texts they thought might be their last.

“People were calling their wives and their husbands and their loved ones to say goodbye,” Raskin recalled, describing the mass chaos inside the House chamber.

Trump’s legal team presented a meandering argument to dismiss the House’s impeachment charge against him for inciting the deadly insurrection at the Capitol.

Trump’s attorneys abruptly reordered their argument after acknowledging the strength of the case presented by House Democrats earlier in the day, and they opened with an unscripted monologue from attorney Bruce Castor that seemed to result in head-scratching and note-passing among senators, who didn’t know what to make of it.

The House, Schoen said, is “focusing on this as though it were some sort of bloodsport.” He called it “pure, raw, misguided partisanship.”

Despite the frozen state of play, senators on both sides of the aisle agreed that the House managers had presented a more compelling case in the early-going.

In their brief, the House impeachment managers previewed their most forceful case against Trump, and how they plan to pick apart his various defenses — from his technical claims that the trial itself is unconstitutional, to his attempt to claim First Amendment protection for his Jan. 6 speech that preceded the violent riot, which left a Capitol Police officer and four others dead.

Trump didn’t just foment the insurrection with weeks of false rhetoric about a stolen election, they argued; he then sat on his hands during the riots and ignored pleas for aid until hours after the threat had metastasized and the Capitol was overrun. Even when he did respond, Trump appeared to excuse the violence, they allege.

“In an astonishing act of further incitement and betrayal, President Trump denounced his own Vice President on Twitter at the very time the mob hunted him through the halls of the Capitol,” the managers wrote. 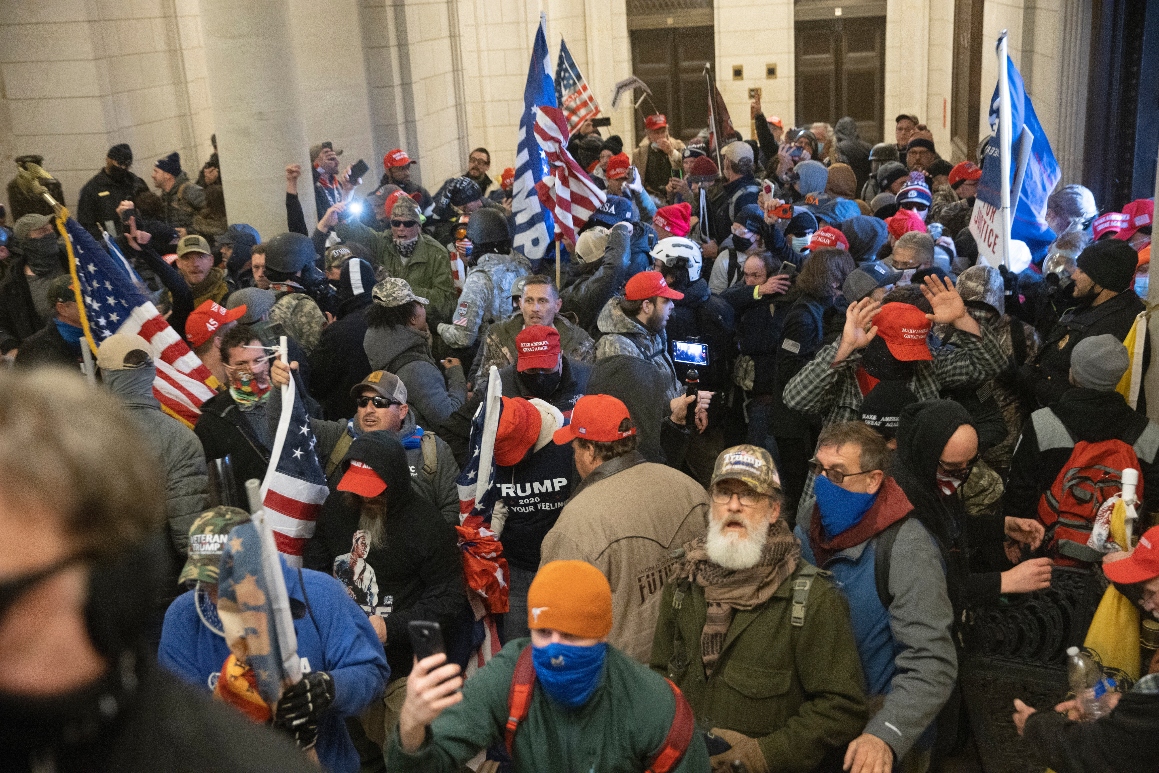 The preview from the House impeachment managers comes as the Senate kicks off the trial on Tuesday with a four-hour debate on whether putting a former president on trial is constitutional — the first step in a trial that is expected to last at least a week, and that seems likely to result in Trump’s acquittal.

While the Senate is expected to uphold the trial’s constitutionality on Tuesday, most GOP senators are likely to vote that the trial is unconstitutional. Last month, 45 out of 50 Senate Republicans voted for a motion that would have effectively nixed the trial on procedural grounds. The vote foreshadowed Trump’s likely acquittal, given that at least 17 Republicans would have to join all Democrats in order for Trump to be convicted.

Democrats say they intend to press Republicans to decide the case on the merits, once the constitutionality debate is resolved in their favor.

When opening arguments beginning on Wednesday, the managers will deliver their case as a “violent crime prosecution,” constructing a “succinct” narrative of the Jan. 6 insurrection that begins weeks earlier as the former president mounted a campaign to delegitimize his 2020 election defeat, top aides said earlier Tuesday.

The aides, speaking on condition of anonymity to describe mechanics of the Senate’s trial, emphasized that they intend to present a visually gripping version of events that draws on the personal experiences that will resonate with many of the lawmakers who fled the violent insurrectionists.

It will not resemble the technical constitutional arguments that they expect to be the dominant focus on Tuesday, when Trump’s legal team attempts to dismiss the case on procedural grounds on the trial’s opening day.

“It’ll be more like a violent crime criminal prosecution, because that is what it is,” one of the advisers said. “It will tell the story, the full story of … how the president incited it. Jan. 6 was the culmination of that incitement with his conduct leading up to it giving meaning and context to his words.”

The managers also intend to rebut Trump’s defense that he exhorted the would-be rioters to act “peacefully,” emphasizing that despite his use of the term “once during his speech,” it came amid the context of a months-long campaign in which Trump used false claims to argue that the election has been stolen, and that he repeated on Jan. 6 knowing that at least some in the crowd had violent intentions.

The managers also plan to undercut Trump’s lawyers’ effort to seize on remarks from prominent Democrats that they allege also incited violence. Though some Democrats may have made “errant” comments, the aides noted, none spent months mounting a concerted campaign based on lies about voter fraud while occupying the unique position as commander-in-chief.

“While other political figures have used heated rhetoric, none of the speeches that President Trump cites bears any resemblance to President Trump’s anti-democratic effort to prolong his presidency by exhorting a mob to attack the Congress,” the managers said in their brief.

The aides said they have no illusions that Senate Republicans will break ranks in large enough numbers to convict Trump, but that the strength of their case will make it difficult for them to acquit him: “We are walking into this thing with our eyes open.”