The Chamber embraces Biden. And Republicans are livid.

Washington’s most powerful trade group is having a political identity crisis.

Over the past month, the U.S. Chamber of Commerce has taken a series of steps that have enraged its traditional Republican allies. It applauded much of President Joe Biden’s $1.9 trillion plan to Covid relief bill; cheered Biden’s decision to rejoin the Paris climate agreement; backed the former leader of the liberal Center of American Progress, Neera Tanden, for Office of Management and Budget director; and expressed openness to raising the minimum wage, though not to $15 an hour.

That’s left the Chamber, a K Street institution known for its bruising battles with past Democratic administrations, occupying an increasingly lonely political center, caught between angry Republicans who feel the trade group has abandoned them and Democrats who are pursuing policies anathema to many of their members.

Rep. Jason Smith (R-Mo.), who publicly bashed the Chamber’s endorsement of Tanden, said in an interview that the Chamber “has forgotten Main Street America” and would have to decide what it wanted to be in Biden’s Washington.

“Do they really care about the bottom line of companies and small businesses and growth, or do they care more about social justice?” Smith asked.

Smith’s frustration with the Chamber is shared by many Republicans who say the group is now unrecognizable to them.

Senate Minority Leader Mitch McConnell told POLITICO last year that he thought the Chamber was “so confused about what they’re about that they probably don’t make much difference.”

Josh Holmes, McConnell’s former chief of staff and a close ally, called some of the Chamber’s recent positions “totally unmoored to any sort of advocacy for business whatsoever.”

The Tanden endorsement, he said, “is particularly mysterious to me, because she has personally participated in multiple efforts during the Obama years to basically destroy Tom Donohue, and the U.S. Chamber for opposing Obamacare, and for opposing them in elections in 2014 and 2012.”

The Chamber insists it’s taking the same approach to the Biden administration that it did with the Trump administration: working with them on the issues of agreement and fighting on areas where they don’t. The group has never pledged to support Republicans, said Neil Bradley, the Chamber’s executive vice president and chief policy officer.

“Some people may have assumed that somehow the Chamber was an arm of a political party,” Bradley said in an interview. “They were wrong in that assumption.”

He saw nothing unusual in the Chamber’s endorsement of Tanden, noting that former Indiana Gov. Mitch Daniels, who ran OMB during George W. Bush’s administration, backed Tanden as well.

“The Chamber’s consistent in believing that people who have basic qualifications should be confirmed and that we should have deference to the elected policymakers,” Bradley said.

The Chamber hasn’t embraced all of Biden’s agenda. The trade group criticized his decision to cancel the Keystone XL pipeline and to “pause” new oil and gas leases on federal lands and in federal waters for 60 days. Tom Donohue, the Chamber’s outgoing chief executive, also pushed back against Biden’s proposal to raise the federal minimum wage to $15 an hour during an Oval Office meeting with the president and other executives on Tuesday. 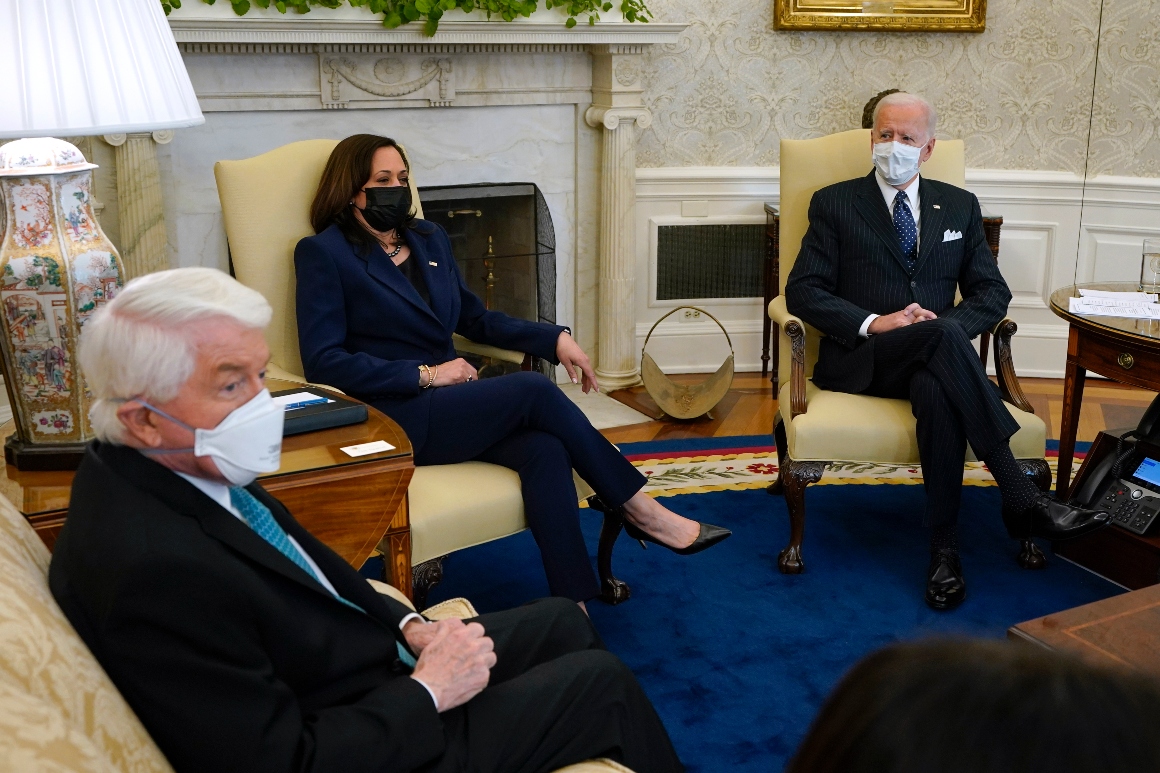 But Suzanne Clark, whom the Chamber announced this week would be its next chief executive, told CNBC’s “Squawk Box” on Wednesday that while “$15 doesn’t seem like the right number, it’s possible the minimum wage needs to be increased.”

While the Chamber had endorsed potentially raising the minimum wage in 2019, the stakes are higher now that Democrats control Congress and the White House. And some Republicans feel the Chamber is being more deferential to Biden than to previous Democratic presidents — a sentiment shared, with delight, by senior officials in the current administration who have used the Chamber’s backing of the Covid relief bill to sell it publicly.

“Traditionally the Chamber has been the tip of the spear on fighting back against liberal policies” under Democratic presidents, one former Chamber official said.

The Chamber’s willingness to work with Biden follows an often rocky relationship with Trump. It championed Trump’s tax cuts and deregulation, but recoiled at the president’s protectionist instincts and his castigation of tech companies. The Chamber also joined with the National Association of Manufacturers and other trade groups to sue the Trump administration over its executive orders on immigration and bashed Trump’s moves on drug pricing.

After Trump supporters broke into the Capitol last month, Donohue pointedly didn’t try to dissuade Vice President Mike Pence and the Cabinet from invoking the 25th Amendment or Congress from impeaching Trump, saying in a statement that “we trust them to use those tools judiciously, if needed, to ensure our nation’s well-being and security.”

The Chamber has also said it’s reviewing the actions of lawmakers who backed the Jan. 6 election challenge and that some of them “by their actions will have forfeited” its support. The review is ongoing.

Trump “was destabilizing and President Obama and Vice President Biden probably look a lot better in the rearview mirror after four years of chaos,” said Valerie Jarrett, a senior adviser to President Barack Obama who led a highly public campaign against the Chamber early in the Obama years before settling into a more productive relationship with Donohue.

The Chamber’s moves during the Biden era have become the talk of K Street, where Republican-leaning operatives question how long member organizations will continue to support its mission and how much political power it still maintains. The Chamber spent more on lobbying than any other trade group last year. But it hasn’t spent as much on TV ads backing candidates as it once did.

While many factors fueled the decline in spending, Bradley said one of them was the rise of super PACs closely aligned with House Speaker Nancy Pelosi, Senate Majority Leader Chuck Schumer, McConnell and McCarthy as alternatives for wealthy donors.

“That dynamic is certainly a change from a decade ago,” he said.

A Republican strategist echoed that assessment, calling the Chamber’s evolving status the result of “a fundamental shift” in national political spending, pointing specifically to the Senate Leadership Fund, which is aligned with McConnell.

“I know Republicans, my friends are going to be angry about what they’re doing,” the strategist said. But the Chamber “is no longer the vehicle anymore of the Republican Senate political organization — SLF is — so they need to realign themselves around” capitalist-minded values, rather than one political party.

The Chamber is trying to use its still-substantial clout to press the Biden administration and Democrats in Congress to work more closely with Republicans on priorities such as the Covid relief bill. While Ron Klain, the White House chief of staff, has touted polls showing most Americans support many aspects of Biden’s plan, Bradley said focusing “on whether one or more Republicans supports it or what polls say is a misreading of what we need to do to get Washington functioning.”

Bipartisanship, however, is not a popular approach within either party right now. And while the business lobby has ruffled feathers on the right, it hasn’t exactly been welcomed with open arms by Democrats, who still recoil at the Chambers efforts to defeat Obamacare and financial regulatory reform.

They’re “in no man’s land,” said John Feehery, a longtime Republican lobbyist. “That’s the problem with what the Chamber’s been doing, is they’ve alienated all the Republicans,” he added. “And so, you know, it’s not like they’re gonna go to the Republican conference and say, ‘Hey, you got to vote for this,’ Republicans are going to go say, ‘Go f— yourself.’”

Rep. Josh Gottheimer, a New Jersey Democrat who last year received an inaugural award for bipartisanship from the Chamber, said he believed the Chamber had “made a strategic decision to shift,” but that it would take “time to build those relationships [with Democrats] and build that level of trust.”

Gottheimer added that he has a “strong and constructive relationship with the group, and encouraged fellow Democrats to engage with them, but said he understood why some of his colleagues might take a “trust but verify” approach.

Lisa Gilbert, executive vice president of the ethics watchdog group Public Citizen which, ironically enough, teamed up with Tanden in the past to criticize the Chamber and Donohue specifically, said she isn’t totally convinced by the Chamber’s move to the middle.

“I don’t necessarily think it changes their policy stances. It just shows that they are savvy enough to understand that supporting only one party will not work in the new environment,” she said, adding that she fears the Chamber’s moves will wrongly, in her view, ingratiate the Chamber among Democrats.

Operatives from both parties were split about just how much clout the Chamber will have as a more centrist player.

“How do you be an effective presence in Washington, D.C. when you manage to alienate absolutely everybody?” another Republican strategist mused. “I’m not sure that you do.”

“There will always be a middle” among members of Congress, Haller said.

“There’s always going to be, in my mind, a place for the Chamber to try to bring people together on issues.”

Sam Stein contributed to this report.