Democrats wrestle with how to quit an acquitted Trump

Donald Trump was just acquitted for a second time. Now the real question is, can Democrats finally quit the former president?

Democrats have spent five years hammering Trump for what they see as the most destructive and corrupt administration in U.S. history. But as the party juggles a daunting legislative to-do list with full control of Washington for the first time in a decade, there’s a growing debate among Democrats over how much more time Congress should spend on an attention-hogging former president already banished from most social media.

“We have a lot of other things to do. I think the worry is that the risk of incitement doesn’t go away, that the president is still going to control the sentiments of a big group of people,” said Sen. Chris Murphy (D-Conn.). “As much as I would love to cast him in the waste bin, he is going to continue to influence American politics and influence a lot of his most rabid followers.”

It’s a delicate balance for Democratic leaders to strike. The Biden administration and congressional Democrats are trying to move aggressively on their legislative priorities, starting with a major coronavirus relief package, and the president had hoped the Senate could split-screen the trial with its other work. But Democrats also know their base loathes the former president and wants him held to account — anti-Trump energy that could flare further after a second acquittal.

“It is important that we find out some of the things that the former president may have been involved in that really hurt our country,” said Rep. Val Demings (D-Fla.), who served as an impeachment manager during Trump’s first trial and wants to continue active oversight of his departed administration. “We’re trying to set America up for success.”

The debate comes as Trump continues to hold a tight grip on the GOP base. And there’s no issue that brings Democrats together faster than criticizing him. But with the second impeachment trial coming to an end, Democrats acknowledge they have few options left at their disposal to sanction Trump. Top Democrats all but ruled out a censure resolution against the former president on Saturday, keenly aware that it would be highly unlikely to clear a 60-vote threshold in the Senate after 43 GOP senators voted to acquit. And there so far appears to be little appetite among Senate Democrats to look at further punishments or probes.

Speaker Nancy Pelosi explicitly ruled out censure during a post-acquittal press conference Saturday, saying it would let “cowardly senators” who didn’t vote to convict “off the hook.”

And there so far appears to be little appetite among Senate Democrats to look at further punishments or probes.

“We don’t put presidents in jail, ex-presidents. We just don’t do that,” said Sen. Jon Tester (D-Mont.). “We never have in the past. I don’t know why we’d start now.”

House Democratic leaders don’t yet have a road map to deal with Trump after the trial, according to several people familiar with the discussions. But some Democrats made their intentions clear after the vote. House Oversight Chair Carolyn Maloney (D-N.Y.) tweeted that she would “keep working to investigate Jan 6 — especially on the question of WHO FINANCED IT,” but did not offer details of that probe. 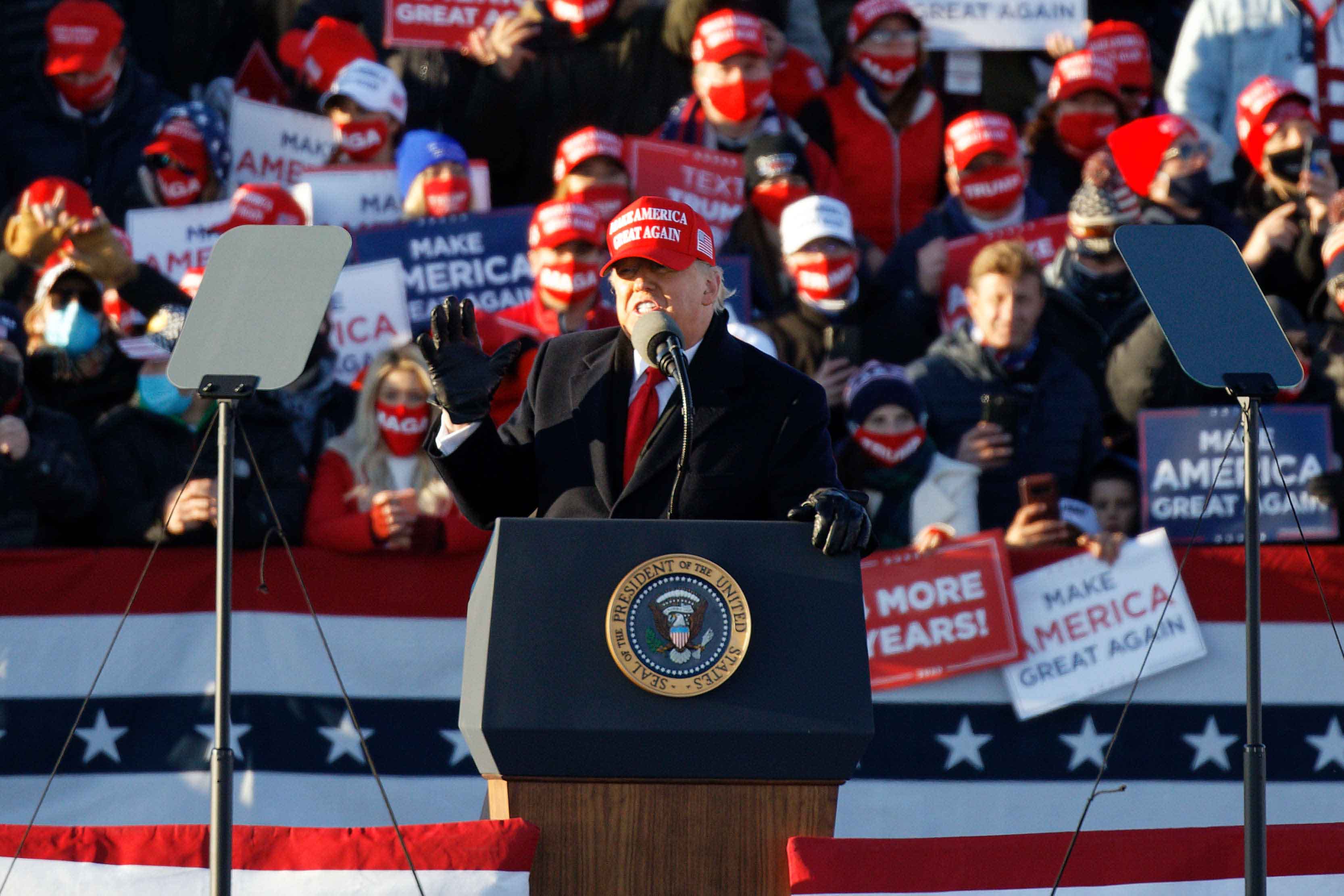 The current legal proceedings already underway — including an effort to obtain Trump’s financial records — will continue, according to senior Democrats. And there’s been some talk among members about revoking his post-presidential privileges and strengthening Congress’s powers to ensure that future presidents are forced to abide by stricter rules for responding to subpoenas, divesting from businesses and not hiring family members.

Some of those measures are already part of a sprawling government accountability bill that Democrats passed last Congress, designated H.R. 1. That bill is expected to come to the floor as early as March, according to a senior Democratic aide.

Senior Democrats also drafted a bill last year that would address a slew of what the party saw as Trump’s abuses of power, proposing stronger subpoena powers for Congress and a suspended statute of limitations for federal offenses conducted by a sitting president. The bill did not come to the floor last Congress, but it could this time around if there is broad enough interest in the caucus.

But right now, the sentiment of many House Democrats is that Trump needs to become an afterthought.

“We’ve gotta get beyond Trump as best we can, as quickly as we can,” Rep. Anthony Brown (D-Md.) said, noting that he would support some restoration of Congress’s powers, as long as it’s not a distraction.

Senate Democrats, meanwhile, argue that an acquittal in the impeachment trial doesn’t mean the exercise was worthless as a way to hold Trump accountable. In the end, seven Republicans voted to convict, more than originally expected.

And Trump still faces the real possibility of legal punishment, even without Congress. Senate Minority Leader Mitch McConnell (R-Ky.), who voted to acquit, suggested to his caucus Saturday that criminal prosecution for Trump could be appropriate in response to the Jan. 6 insurrection.

State legal authorities are also looking into Trump. Just hours before the Senate voted, news broke that New York prosecutors are investigating financial details of Trump-owned properties — a reminder of the expansive web of ongoing investigations outside Washington. And Georgia prosecutors recently opened an investigation into Trump’s call to pressure Secretary of State Brad Raffensperger into overturning his loss.

With the trial over, congressional Democrats are now moving forward with crafting a $1.9 trillion coronavirus relief package — the party’s most urgent priority. An ambitious legislative agenda will follow that, likely starting with infrastructure and immigration.

Still, some in the party argue that deciding whether to keep focusing on making Trump pay or to concentrate on Democratic priorities is a false choice.

“I don’t think it’s an either-or,” said Rep. Sean Patrick Maloney (D-N.Y.), chair of the House Democrats’ campaign arm. “I don’t think it makes any sense for us to be consumed with Donald Trump. But it doesn’t mean we shouldn’t demand accountability from both President Trump and his enablers, because the truth matters.” 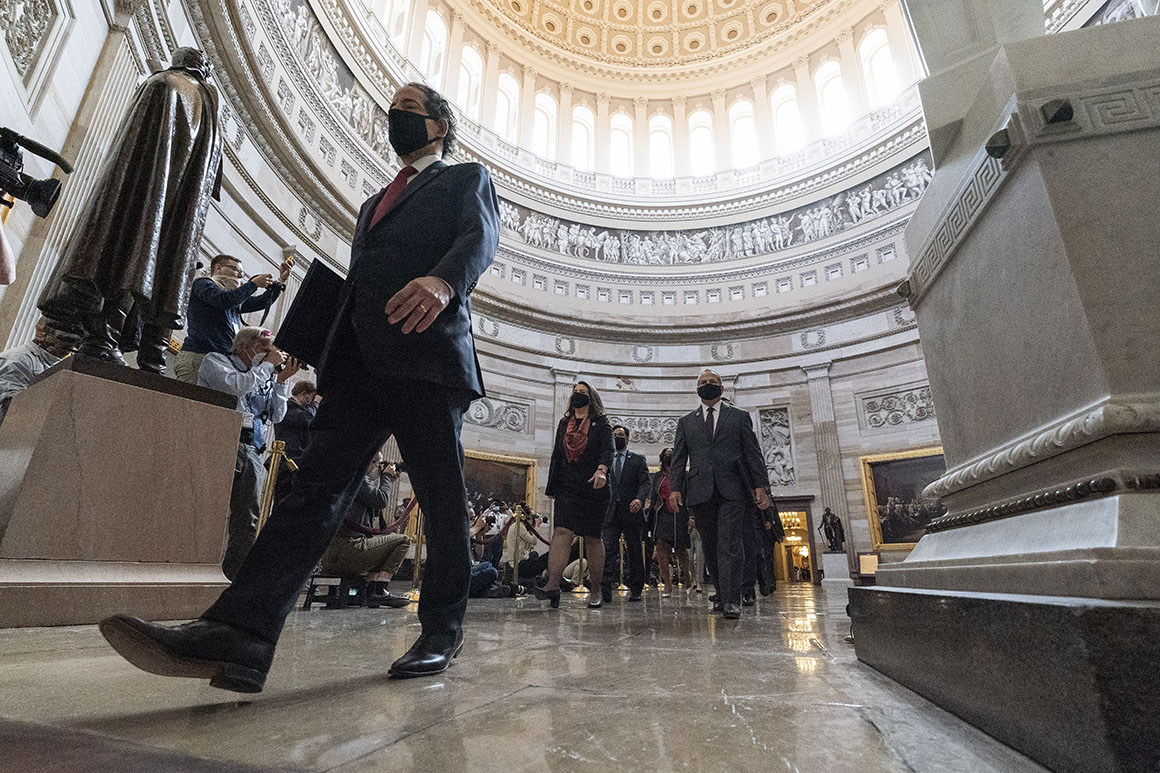 But Democrats are also aware of a key reality: Trump is not going to simply disappear. While he’s lost his biggest megaphone — his Twitter account — the former president is planning to weigh in in GOP primaries and is mulling a 2024 run.

Trump’s expected return to politics poses further risks for the Democratic Party, which has long struggled with whether to ignore or engage him. In the 2018 midterms, House Democrats successfully neutered Trump’s ability to swallow up the national news cycle by running a tightly scripted campaign on health care, ignoring his taunts on contentious issues.

But even after Democrats re-took the House, Trump and his Twitter feed commandeered every narrative on a daily basis until the platform finally banned the former president following the Jan. 6 insurrection.

“It’s my hope that having seen these shocking and clear videos about his intent” on that day, Sen. Chris Coons (D-Del.) said of Trump, “that they will no longer support him.”

With Trump’s electoral future murky, Democrats are under intense pressure to deliver on their agenda ahead of the 2022 midterms — when many lawmakers privately believe the House majority could again flip.

Many Democrats say that agenda should include proposals to reassert congressional authority after watching Trump trample on the legislative branch for years. But they say that even that shouldn’t be marketed as a response to Trump.

“If there was a Democratic president who was exceeding the normal traditional authorities of the presidency, Republicans would want that curbed as well,” Rep. Elissa Slotkin (D-Mich.) said. “It’s for everybody. It’s not just a punishment.”