The congressman and his wingman

Florida has never seen a tax collector like Joel Greenberg.

His Seminole County tax office was the only one in the state where employees were armed with pistols and body armor. He wore his own law enforcement badge and carried a sidearm at tax collector conferences. He let people pay property taxes with Bitcoin. He tweeted Islamophobic comments, installed a remote-controlled sprinkler system to spray petition gatherers he didn’t like and doled out fat contracts to his groomsmen shortly after winning the usually humdrum Orlando-area office with a campaign to stop “crony capitalism.”

Now Greenberg’s in a federal jail, awaiting trial on a wide-ranging 33-count indictment alleging a host of financial crimes, stalking, identity theft and sex trafficking a minor, all of which have become national news because of his close association with Rep. Matt Gaetz, the Florida Republican congressman fighting for his political life.

Their relationship is central to the allegations against Gaetz, a fierce Donald Trump ally who denies having sexual relations with a 17-year-old and prostitutes. Together, the taxman and the congressman shared a life-in-the-fast lane existence that contradicted the staid image that most elected officials are careful to maintain.

“You couldn’t make this story up, it’s so crazy,” said David Bear, an attorney for a Greenberg political rival whom the now-former Seminole County tax collector is accused of falsely smearing as a pedophile two years ago.

“Ultimately, it’s about abuse of power and how the Republican Party lost its way with guys like this,” Bear said. “As one of the few remaining Never Trump Republicans, nothing could make me happier than seeing Matt Gaetz and his kind being taken down. They’re the embodiment of Trumpism.”

Thirty-something scions of wealthy families, Gaetz and Greenberg were elected to their respective offices during the first Trump wave that swept Florida in 2016 and became close friends because of their shared interest in brash populist politics, cryptocurrencies and attractive young women.

The Gaetz-Greenberg relationship wasn’t one of equals, according to mutual friends, who say the tax collector looked up to the congressman. A former state legislator, Gaetz was a regular fixture on Fox who had the president’s ear. Greenberg introduced him to a handful of young women he met on SeekingArrangement, a dating website that connects attractive women with so-called sugar daddies. Greenberg regularly trolled the site for dates.

“Joel idolized Matt,” said one mutual friend, who declined to be named. “And since they both loved beautiful women and Joel seemed to have endless access to them, it was definitely an additional incentive for Matt to stick around. Also, Joel is one of the funnest people you can hang out with.”

The two shared more than one girlfriend, according to interviews with eight friends and associates who know the two men. Gaetz described Greenberg as a “wingman” to some acquaintances, and even promoted him as a potential congressional candidate. Now many suspect Greenberg might be cooperating with prosecutors to build a case against Gaetz.

Less than a year after winning office, the indictment says, Greenberg engaged in a sexual relationship with a minor and, using his special access to a federal ID system as tax collector, “obtained, disclosed, transferred, and used personal information of individuals … including individuals with whom [he] was engaged in ‘sugar daddy’ relationships.”

Greenberg also created fake driver’s licenses featuring his face but the personal information of others — including a man with a Puerto Rico driver’s license — that he used “to facilitate his efforts to engage in commercial sex acts,” the indictment says. In Florida, people can surrender defunct or out-of-state licenses to tax collectors who have the power to issue new IDs. The old IDs are supposed to be destroyed.

Gaetz has not been charged with any crimes or named in an indictment but has acknowledged he’s the subject of a federal investigation.

“I have never paid for sex,” Gaetz said via text message. “I haven’t had sex with a seventeen year old since I was seventeen.” 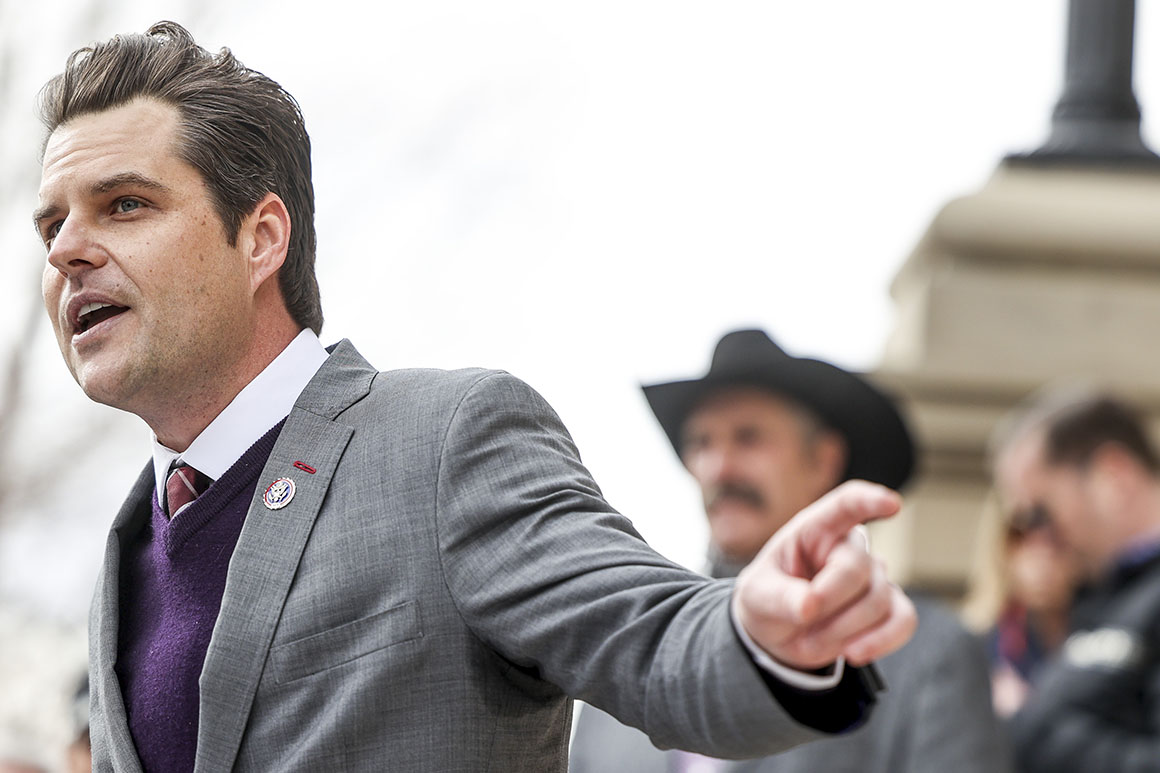 At one point, Gaetz and Greenberg made an unexpected after-hours appearance in surveillance video of one of the tax collector’s offices where the two were spotted in the area where IDs are kept. The incident was reported to the feds by a source.

“I have never been involved in whatever Greenberg was doing with IDs,” Gaetz told POLITICO. “Once I temporarily lost my wallet and asked if I could go to his office and get a lawful replacement. This is what tax collectors do. I later found my wallet and didn’t need this service.”

Though a Northwest Florida congressman, Gaetz had a busy travel and personal schedule that often brought him through the Orlando area where Greenberg lived. He did frequent TV hits from the Fox 35 studio in Orlando, one friend noted, and would sometimes double date with Greenberg and women in their 20s. Gaetz, 38, is now engaged and says he is monogamous. Greenberg is 34 and married; his friends and associates say he told them he was in an open relationship.

The friendship between the two men began to crash and burn as Greenberg became mired in a host of corruption scandals detailed by the hometown Orlando Sentinel and then by a federal grand jury, which returned the first indictment against him in June 2020 concerning a pedophilia smear against one of his GOP challengers. Greenberg resigned June 24, the day after his arrest, two months before the primary.

During his arrest, federal agents found him in possession of other people’s IDs, leading to a second superseding indictment Aug. 19 concerning identity theft and the underage teen. Gaetz came under scrutiny at this point of the investigation, sources familiar with the investigation say.

Three Greenberg friends — including one who testified before the federal grand jury investigation into Greenberg — told POLITICO they personally heard him boast about his 2017 relationship with a then-17-year-old woman who went on to work in pornography.

She did not return multiple messages to POLITICO on her cellphone and social media accounts.

Greenberg’s friends say he encountered the woman on SeekingArrangement. Gaetz wouldn’t discuss specifics of the case, but denies ever being on the website or having sexual relations with the victim or any minor.

In a Washington Examiner op-ed Monday, Gaetz tacitly acknowledged that he “paid for an adult girlfriend’s expenses” on occasion and wrote that “there are exactly zero credible (or even non-credible) accusers willing to come forward by name and state on the public record that I behaved improperly toward them.”

Gaetz claims that he and his father — independently wealthy former Florida Senate President Don Gaetz — were extorted in a complex scheme to pay to free a former U.S. federal agent who disappeared in Iran. The agent, Bob Levinson, has been presumed dead for years. Don Gaetz confirmed to POLITICO that he wore a wire under FBI supervision to catch the extortionists, but the operation was foiled when The New York Times reported last week about the allegations against his son.

Novak could not be reached by POLITICO and Adams declined to comment.

In his op-ed, Matt Gaetz portrayed himself as a victim of a smear campaign and wrote that he’s “sure some partisan crooks in Merrick Garland’s Justice Department want to pervert the truth and the law to go after me.”

But Garland wasn’t sworn into office until March 11. The investigation into Gaetz began under Trump’s former attorney general, Bill Barr, after Greenberg allegedly wrote the anonymous letter purporting to be a student accusing his music teacher, Brian Beute, of pedophilia.

Beute’s lawyer, Bear, pushed local, state, and ultimately federal investigators to open an inquiry that eventually found Greenberg’s fingerprints on the phony letters and tracked the creation of the phony social media accounts to a computer at Greenberg’s house.

Less than a week after his initial arrest and resignation, federal prosecutors allege, Greenberg kickstarted a new fraudulent scheme over Covid relief money. That charge was added to his third and (so far) final superseding indictment that was returned March 30. The indictment also alleged Greenberg had set up a company called Government Blockchain Systems LLC to use his elected office to “embezzle and divert over $400,000” in public money to personally benefit himself by using cryptocurrency like Bitcoin.

In addition, Greenberg is accused of misusing tax money to buy Bitcoin mining machines and then selling them at a personal profit on Amazon. The indictment alleges Greenberg spent some of his proceeds on autographed memorabilia of basketball legends Michael Jordan and Kobe Bryant.

While in office, Greenberg publicly promoted Bitcoin as a way for citizens to pay property taxes, which was also an appealing idea to Gaetz, who is a member of the Congressional Blockchain Caucus.

“Sure, Matt and Joel have a taste for pretty women like any red-blooded American male, but their relationship was personal and political beyond that,” said one friend. “They’re both MAGA, both into cryptocurrency and they’re both really smart.”

One of Florida’s most prominent trial attorneys and Democratic donors, John Morgan, attested to Greenberg’s smarts, but said “he’s on the line between genius and crazy. He’s that guy.” Morgan said he’s known Greenberg since he was a little kid and had met up on one or two occasions with Gaetz and Greenberg for drinks, but he didn’t witness or suspect any criminal activity.

Longtime Trump associate Roger Stone, who has decried the investigation into Gaetz, also came into contact with the two men when they were out on the town near his Fort Lauderdale home in 2017. Greenberg posted a Twitter picture of the meeting.

“He’s really eccentric, to say the least,” said Stone. “It was the only tax collector’s office in the state where he gave employees a badge and a gun.”

Stone said he only met Greenberg about three times and, on one occasion, each man had an attractive young date. “They were definitely of age.”