Supreme Court expansion was one of the left’s most galvanizing ideas during the 2020 Democratic primary. But the idea is going nowhere with sitting Democratic senators.

“I don’t think the American public is interested in having the Supreme Court expanded,” said Sen. Michael Bennet (D-Colo.).

Sen. Mark Kelly (D-Ariz.), who represents a particularly valuable swing state, said “the more responsible thing to do is to keep it at nine justices.” And Sen. Catherine Cortez Masto (D-Nev.) said she opposes “adding seats that politicize the court.”

That trio is facing reelection in 2022, making their opinions particularly important to Senate Majority Leader Chuck Schumer (D-N.Y.). But as Sen. Ed Markey (D-Mass.) formally pushes for high court expansion, resurfacing the popular progressive cause in response to the GOP’s relentless drive to fill court seats during the Trump years, it’s clear that few of Markey’s colleagues agree with him.

While liberal measures on election reform, police bias and congressional ethics remain relatively popular with the 50-member Senate majority, expanding the Supreme Court is close to dead among the chamber’s Democrats.

“This is in the category of things that couldn’t muster 50 votes and probably couldn’t muster 40 votes,” said Sen. Brian Schatz (D-Hawaii). “We have a historic opportunity to make change here and we should focus on those issues where we can get a majority.”

Sen. Sherrod Brown (D-Ohio) said adding seats is a topic that the media and Republicans like to talk about but one that’s got no traction in the Senate. “Somebody’s introduced a bill,” he said. “We’re focused on Covid and infrastructure.”

With a 6-3 conservative majority on the high court poised to influence rulings for a generation, progressives say that now is the time to act. They’re betting that pressure on Democratic lawmakers will increase as the court hands down more decisions that are unpopular with the party’s base.

Speaker Nancy Pelosi (D-Calif.) has said she has no plans to bring the high court expansion bill to the floor, and its prospects are equally dim in the Senate. But growing or otherwise reforming the Supreme Court nevertheless became a litmus test for the left during last year’s Democratic presidential primaries. Even though Biden never supported the idea, several candidates said they’d be open to it, including now-Secretary of Transportation Pete Buttigieg.

And although the proposal has no traction in today’s Democratic Congress, Senate Republicans are hoping voters remember how popular court expansion was among Democratic presidential candidates in 2020. The GOP is seizing on Markey’s measure in the lead-up to the 2022 midterms as a way to pressure Democratic incumbents and challengers.

“I think it’s a big issue,” said Sen. Rick Scott (R-Fla.), chair of the National Republican Senatorial Committee, the fundraising arm of Senate Republicans. “I can tell you we do our work over at the NRSC and it’s resonating. The public doesn’t like it. Republicans and Democrats, neither of them like it.”

McConnell has lambasted Biden’s recent move to create a commission focused on court reform and reiterated recently that adding seats to the Supreme Court would “destroy its legitimacy.” The Kentucky Republican called on “responsible people across the political spectrum” to denounce the idea. Republicans also tried to needle Democrats on the issue in February, when Sen. Tom Cotton (R-Ark.) tried to create a new procedural tool usable against any future bill to add seats to the Supreme Court. (Every Democrat opposed Cotton’s plan.)

Sen. Tim Kaine (D-Va.), who is “not persuaded” on court packing, said that Republicans would “seize on” court expansion “because they don’t want to talk about infrastructure.”

Even as the Markey-led legislation languishes, the makeup of the federal judiciary is well on its way to becoming a mainstream political issue. Democrats still haven’t forgotten the 2016 decision by McConnell, then Senate majority leader, to block consideration of former President Barack Obama’s Supreme Court nominee Merrick Garland, citing divided government in a presidential election year. Garland is now Biden’s attorney general.

During Trump’s term, Senate Republicans confirmed more than 200 judges to the federal bench, and Democrats are eager to catch up now that they have control of Washington. While Biden likely won’t have as many vacancies to fill as Trump did, the Senate will begin holding confirmation hearings on his judicial nominees this week.

And the Supreme Court is never far from lawmakers’ minds. Given that Senate Democrats hold a fragile 50-vote majority and Stephen Breyer, one of three liberal justices, is the oldest member of the high court by a decade, the 82-year-old is under liberal pressure to retire. The progressive groups squeezing Breyer want to avoid what happened with Ginsburg, a liberal justice who died while Republicans had the Senate and the White House.

Judge Ketanji Brown Jackson, Biden’s pick to replace Garland on the U.S. Court of Appeals for the D.C. Circuit Court of Appeals, is widely viewed as a possible future Supreme Court nominee.

While Senate Democrats say they’re waiting for Biden’s commission to issue a recommendation on court reform, hardly anyone is expecting that panel to endorse court expansion. Ginsburg opposed so-called court packing, and Breyer recently warned that adding seats would only add to public distrust of the institution. Former Senate Democratic Leader Harry Reid of Nevada said he has no issue with the Biden commission but urged Democrats to be “very, very careful in saying we need to expand the Supreme Court.” 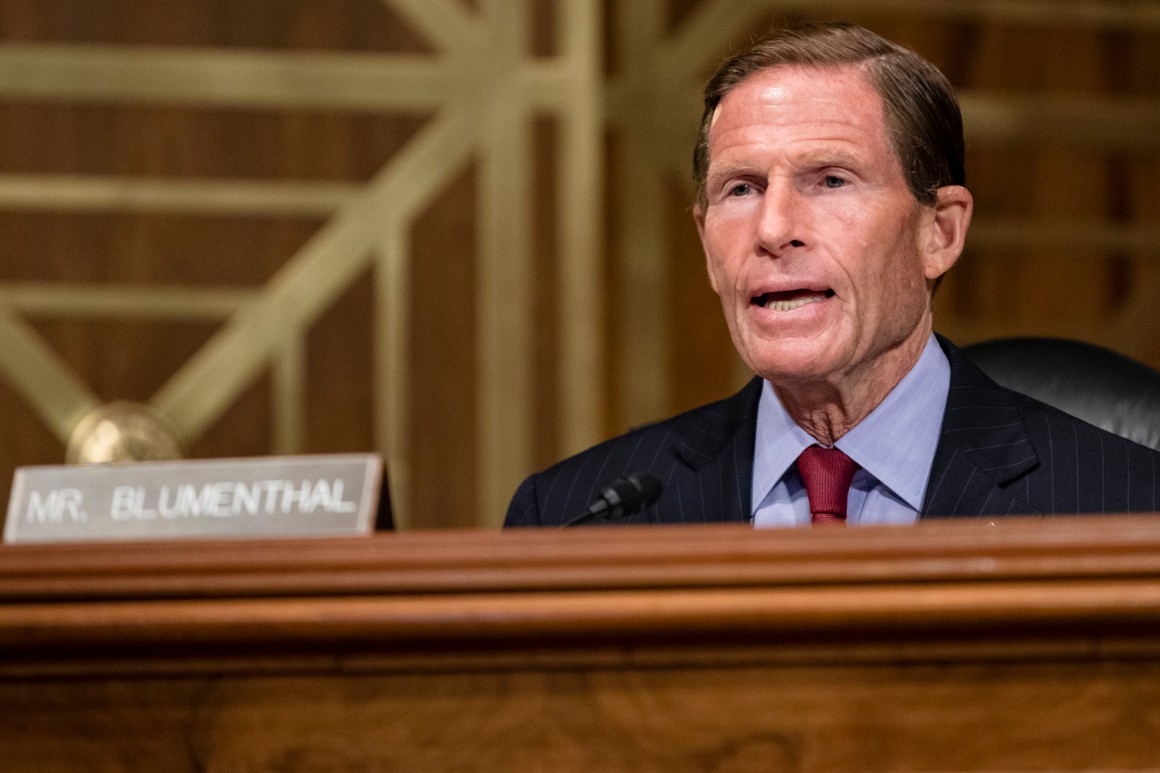 Others warned that adding seats could open the door to further politicization of the court. “I’m skeptical of it because I don’t know where it stops,” said Sen. Angus King (I-Maine), who caucuses with Democrats. “You could end up with a 100-person Supreme Court that changes every four years.”

Despite opposition from many Senate Democrats, progressive groups argue the mere introduction of a bill that addresses the topic is a sign of momentum for court expansion.

“Just as filibuster reform was not a mainstream position within the Democratic caucus even a year ago, adding seats to the Supreme Court to preserve our democracy is an idea that has a growing grassroots constituency,” said Chris Kang, chief counsel of the liberal group Demand Justice, which is helmed by a former Schumer aide.

“We are organizing a movement that will continue to push this idea until we have the support we need.”