Four months after a siege on the Capitol, much of the House is still living like it’s Jan. 7.

A sizable faction of the House GOP is downplaying Jan. 6’s violent attack by a pro-Trump mob, with one Republican comparing it to a “normal tourist visit.” Infuriated Democrats say remarks like that — plus this week’s public ousting of the most vocal Trump critic in the GOP — is further proof of the extremism overtaking the Republican Party, leaving little chance of healing the political and psychological wounds caused by the deadly assault on Congress.

The rift between the two parties over the insurrection is worse today than it’s been at perhaps any point since early January, with lawmakers openly berating each other in the hallways and refusing to partner on legislation. The fractious breakdown of what little bipartisan comity remained in the House is playing out, of course, in the long shadow of the former president.

And the growing tide of GOP insurrection revisionism could turn the already-bitter divide between House Democrats and Republicans who voted to support Donald Trump’s election challenges into permanent cold war.

“The tension feels very high,” said Rep. Madeleine Dean (D-Pa.), who this week watched Republicans sink her bipartisan opioids bill on the floor after she refused to allow GOP Rep. Buddy Carter co-lead the bill. Dean opted against working directly with Carter because in the wee hours of Jan. 7, he voted against certifying her state’s election results.

Carter, who had partnered with Dean on an earlier version of the bill before his certification vote, blamed “cancel culture” for the dispute with Dean and other Democrats.

“I am not apologizing,” Carter said in an interview after the flare-up, adding that for him the “big lie” isn’t the 2020 election but Biden talking of bipartisanship at his inauguration. “I am proud of what I did on Jan. 6 … I would do it again.”

To Democrats, it seems that House Republicans are trying to gloss over the facts of the insurrection at every turn, corroding Congress’ already narrow pipeline for bipartisan lawmaking. Another GOP lawmaker, Rep. Paul Gosar (R-Ariz.) this week denounced federal law enforcement for “harassing peaceful patriots” who took part in the insurrection. The full GOP conference booted Rep. Liz Cheney from their leadership, in part, for linking Trump to the violence that day.

Several House Republicans have pushed back against their colleagues’ attempts to downplay the events of Jan. 6 this week, noting that they, too, were under threat. House Minority Leader Kevin McCarthy on Thursday called the attack “atrocious.” Rep. Kelly Armstrong (R-N.D.) called it “comically stupid” to suggest the storming of the Capitol was like a tourist visit, as Rep. Andrew Clyde (R-Ga.) did this week.

But House GOP leaders have done little publicly to rein in their members who are pushing a false narrative about the mob that stormed the building. They have also largely failed to condemn members who have resorted to aggressive tactics against Democrats, such as Rep. Marjorie Taylor Greene (R-Ga.) 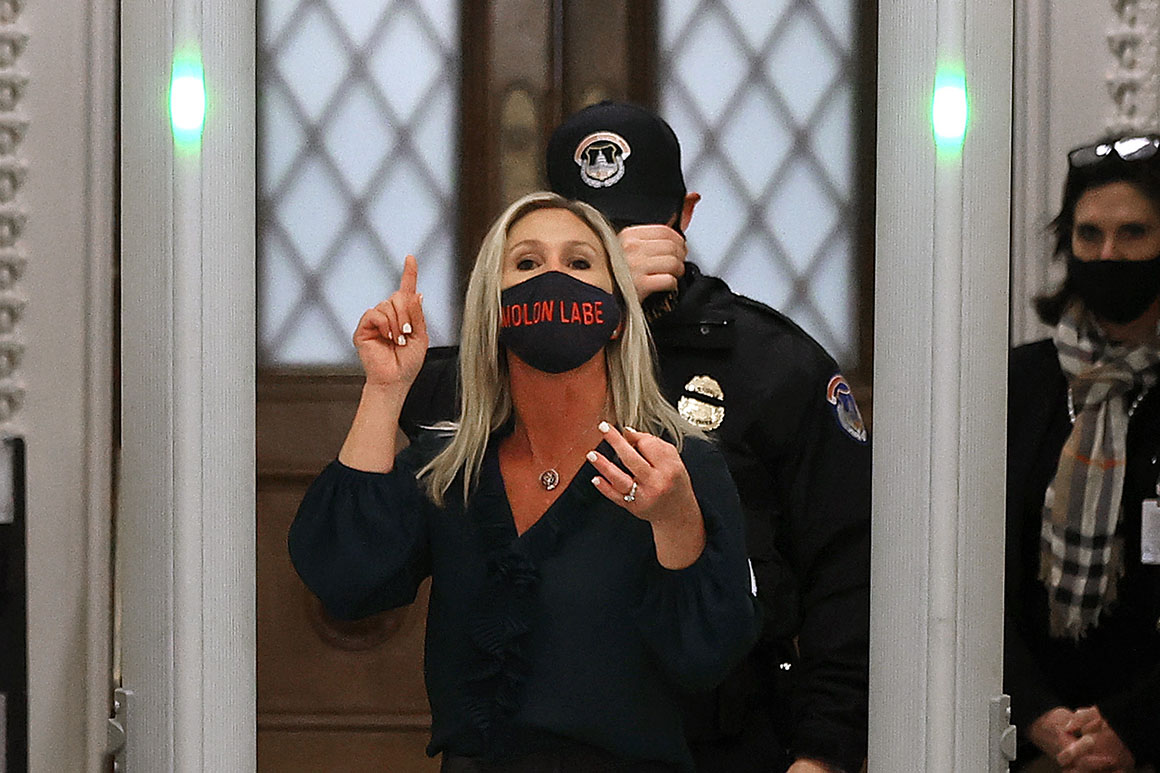 Greene was observed chasing Rep. Alexandria Ocasio-Cortez (D-N.Y.) down a hallway and berating the New York Democrat about left-wing extremists, whom some Republicans have falsely blamed for the Jan. 6 attack. In response, Rep. Jimmy Gomez (D-Calif.) walked into the House chamber on Thursday afternoon wearing a mask saying “expel MTG.”

In a private call with members on Thursday morning, House Majority Leader Steny Hoyer (D-Md.) strongly defended Ocasio-Cortez from the harassment and suggested that Democrats needed to closely watch the actions of GOP members, according to people listening. Both he and Pelosi said the incident should likely be referred to the House Ethics Committee.

During the call, Pelosi also rebuked Clyde’s comparison of the riot to a “tourist” visit, repeatedly calling the Republican’s revisionist history “sick.”

Speaking later in the day to reporters, Pelosi described Greene’s behavior toward Ocasio-Cortez as “verbal assault,” telling reporters: “It is a cause for trauma and fear among members.”

Greene downplayed the interaction on Thursday, insisting she was “talking” not “screaming.”

“I don’t know why [Ocasio-Cortez] needs security. She shouldn’t have a problem debating about her policy,” Greene told reporters Thursday. (Ocasio-Cortez, who declined to elaborate on the details of the encounter, later told reporters: “I used to work as a bartender. These are the kind of people I threw out of bars all the time.”)

Inside the Capitol, the signs of Jan. 6 are still clear: The building remains surrounded by an enormous fence and National Guard troops can still be spotted throughout the complex. Several windows are still under repair.

But the damage from that day is more than the physical. Democratic lawmakers and staff describe an astonishing shift in the dynamics with Republicans with whom they once had strong working relationships. The growing gap between the two parties threatens whatever glimmer of hope remains for bipartisan negotiations on a massive infrastructure package, though President Joe Biden has so far tried to stay above the fray.

For the first time in their memories, some Democratic staffers said they could no longer trust GOP counterparts. It’s not just Jan. 6, they said, but also the still-present threat of the coronavirus, with some Republicans still refusing to be vaccinated while demanding the Capitol reopen for more in-person business.

“It’s hard to imagine anything getting better,” one Democratic aide said.

According to Rep. John Yarmuth (D-Ky.), it also can’t get much worse. “I don’t know how it can be harder. They’re already impossible,” he said of Republicans.

Security concerns also remain top of mind for lawmakers and staff. Leaders of both parties have spent recent weeks squabbling over a roughly $2 billion security funding bill. It would boost the budget for the Capitol Police as well as other security measures, such as allowing members facing major threats to receive more protection outside the building.

The bigger unanswered questions, for some of those lawmakers, are about threats inside the building.

Weeks after the Jan. 6 attack, a top aide to Rep. Mondaire Jones (D-N.Y.) found a piece of anti-Semitic propaganda at a Capitol Police checkpoint. Jones, who is Black, said he feared there could be “white nationalist sympathies” within the Capitol Police force and said he may not be ready to support a push to spend millions more on the department until he gets answers.

“My concern is that something awful will happen again if there is not a serious commitment to a comprehensive assessment of white nationalist sympathies within the Capitol Police force,” he said in a recent interview.

Asked about the incident, the Capitol Police said the officer was still suspended and an investigation was ongoing, though they declined to provide further details.

Some Democrats also still believe a small group of Trump loyalist lawmakers may have had a role in the insurrection. The concerns raised by Rep. Mikie Sherrill (D-N.J.) and dozens of other members about the tours given by Republican members of Congress in the days leading up to Jan. 6 remain unresolved. 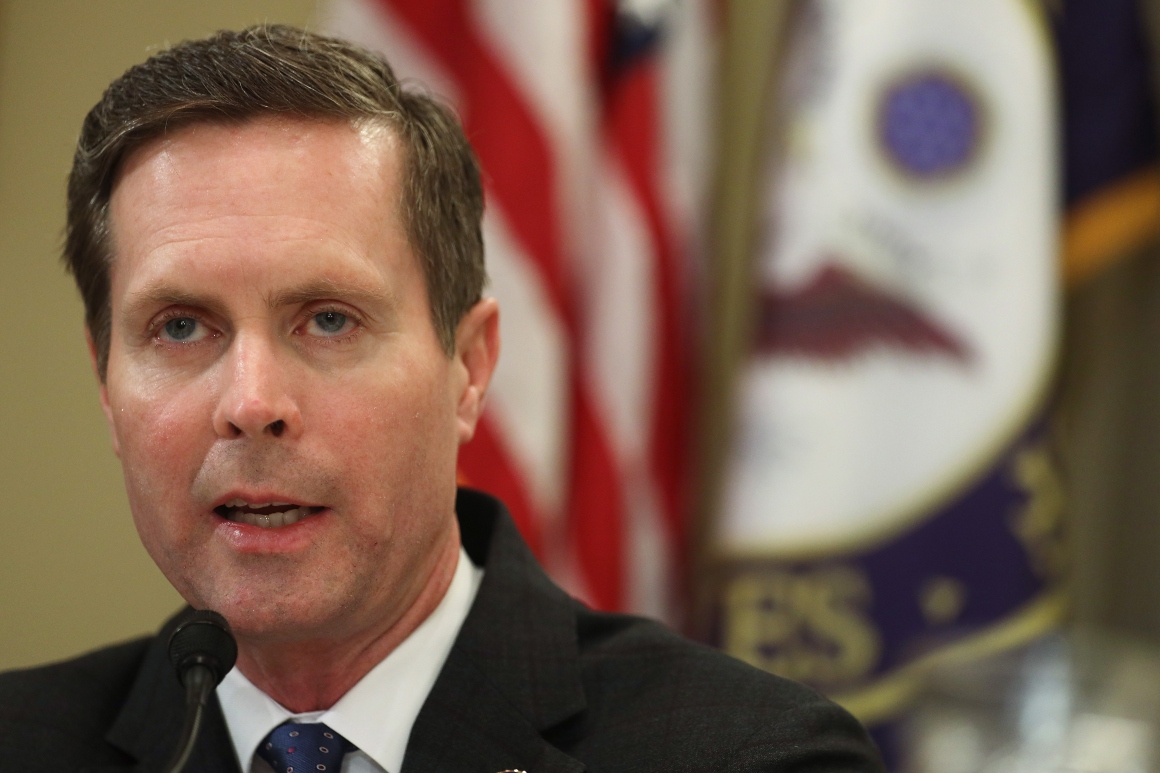 Those accusations infuriate many Republicans. A group of GOP members, led by Rep. Rodney Davis (R-Ill.), have filed a complaint with the House Ethics Committee against the Democrats who alleged misconduct related to the tours.

Neither party knows how long the current freeze in relations will last. Several Democrats, though, have made clear that they’re not cutting ties with every House Republican, and say they’ve maintained goodwill with the dozens of GOP lawmakers who did vote to certify.

Dean, who found herself confronted by McCarthy and Carter on the floor this week about the opioids bill, said that she got some help from another Republican, Rep. Andy Barr of Kentucky. who voted to certify Biden’s win.

The day after the dust-up on the floor, Dean said she went up to Barr to thank him.

“’We disagree on a lot of things,’” Dean recalled telling Barr. “‘But you certainly spoke with decency, and you tried to get your leadership to speak with decency.’”

Olivia Beavers contributed to this report.